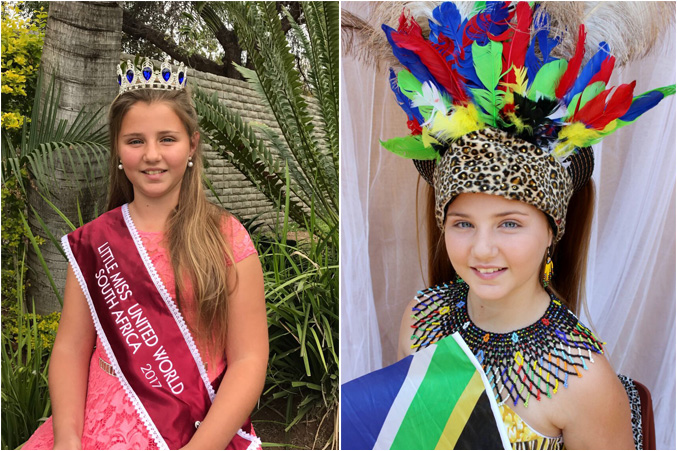 The International Children’s Festival was established in 2000 with the aim of forming
a new nation of talented, educated and friendly children. Representatives from all over
the world gather to represent their countries and show their heritage and talents.
Representatives are between the ages of 5 and 14 years old.
Mianel du Plooy will be representing South Africa at the International Children’s
Festival of Culture and Arts: Little Miss & Little Mister United World in Greece
September 2017. In April 2017, Mianel chose Conservation of Butterflies in South Africa (CBISA) as
the organisation that she would like to support, not only to raise funds for, but also to
show the need for conservation of butterflies in South Africa.
Conservation of Butterflies in South Africa (CBISA) is proud that Mianel has taken
the plight of our South Africa butterflies to heart. CBISA is very thankful for the
R5135.00 that Mianel has raised in her fundraising efforts.
CBISA wish Mianel all the best in not only her charity work, but also in the
competition itself during September. We will be following Mianel’s progress with
keen interest.
Kind regards

Hi there. I have ordered butterflies from you for both my wedding and my ten year anniversary. April is our 15th anniversary! Can I organise 30 butterflies ?

Hi –I just gave you guys a post on Facebook !!
GOOD SERVICE CANNOT GO UNPUNISHED (PUBLISHED?) Most of my friends know that I am mad about macro, and have posted pics of Butterfly wings taken by experts – and I wanna doit ! Butterfly world down here were most unhelpful, almost rude. So it comes as a pleasant surprise when I got a reply from Lizanne Whiteley of “Conservation of Butterflies in South Africa”, (the South African Butterfly Breeding Association) who was willing to look for some wings to send me, but felt it may not be worth the expense.In my language that is a YES – now we are negotiating.
One thing led to another, and they “APOLOGISED” and asked if I would be prepared to accept some “exotic” wings, as they could not use them.Exotic – WOW.
I made a donation to cover postage, and then some, and now await delivery !!

THANK YOU LIZANNE AND EARLE of CBISA

“Yesterday we were sitting outside with an ice cold drink. And the most beautiful butterfly came and sat on my glass. I could see he wanted to have something to drink so I tilted the glass and there he was drinking and flew off again. What an amazing experience.”